How are ATM PINs validated

It is interesting to understand how ATM pins are validated.

The following components are involved in an ATM transaction: 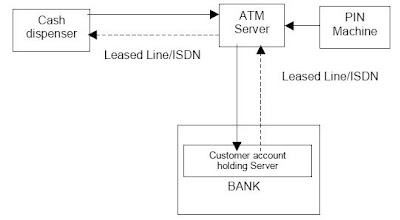 PIN generation process:
The ATM Pin is never stored in any of the systems. Instead what is stored in the system is an offset of the pin. This is how it is done in very simple form. The actual mechanism is slightly more complicated and you can read more about it from the references mentioned at the end.

Changing your PIN on an ATM:
If you look carefully, the ATM cash dispenser installation itself is a critical step. The ATM cash dispenser shared key needs to be installed in a secure manner. Also, it is possible to have all of 1, 2 and 3 to be located on the ATM machine installation itself. In such a case, the key k needs to be entered securely in each ATM once it is installed. Such key setup on ATMs is done by splitting the key into two parts and having two different bank officers enter their portions of the keys separately. The key storage and the encryption/decryption is done is a special tamper proof module in the ATM cash dispenser.

Sometimes the pin offset is encoded into the magnetic stripe of the card itself, but that is becoming rare as it is not possible for the user to change the pin in such a scenario.

If you use your ATM card in a different bank's account, PIN verification happens in the following manner:
(This is a simplified explanation of cross bank PIN verification. Tapesh's comment to this post explains this much more lucidly and in more detail, particularly the role of card networks. Please refer to the comments section at the end of this post. I'm also replicating it partly below.

...the acquiring bank cannot keep shared secret of each and every issuing bank in the world.

If an Off-us card is presented for PIN validation , acquiring bank encrypts it with shared secret of VISA /MC depending upon the BIN range (first 6 digit of the card number) and then VISA/MC decrypts it at their end.

These card associations exactly know that a particular BIN range belongs to which bank and accordingly they use the respective shared secret of that issuing bank for encrypting it further.

Now, the PIN is decrypted at the issuing bank who has its offset stored in its database and can re-generate the PIN using the offset, card number and few secret keys.

This newly generated PIN is validated against the PIN which has traveled through acquiring host to VISA/MC host to issuing bank...)

Thank you. I'm all ears!